Yes, we did it again and it was amazing. Caravan put on a Made in the USA Fashion show that included 4 designers all produced and designed in the USA and two fabulous performers. With the products of Salon Grafix, POP, Zoya and Babyliss Pro this brought the designers collections come to life on the runway.

When it came to the performers we had something unique that included Tanay. Tanay is a new rising singer, songwriter in. Writing for artist like Amerie, she has scored a Japanese movie in 2002 and won a showcase at the Apollo Theater in New York City. She appeared in the late Michael Jacksons “Remember the time” video expressing her eight-year study in dance. 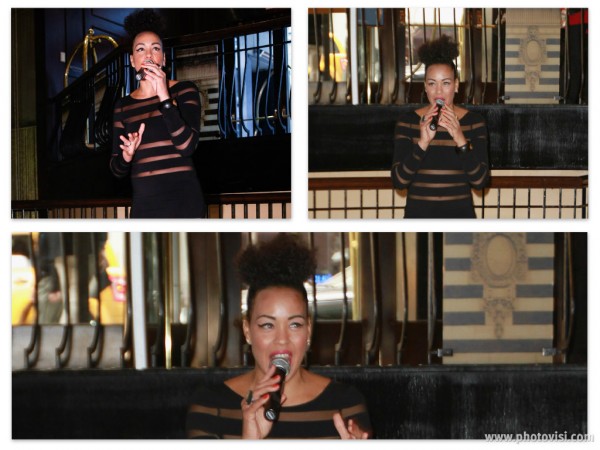 MTV Made’s Award winning singer-activist Maya Azucena travels the world making music that matters. Self-described as sounding like “The Roots if fronted by a singer with 4-octaves”. Maya has been part of countless collaborations, including a Grammy certificate winning feature on Stephen Marley’s CD “Mind Control,”. In 2010, Maya was heard on multiple tracks from the critically acclaimed album Pickin’ Up The Pieces by Fitz and The Tantrums. Her music has been featured on HBO’s The Wire and her likeness on NBC’s 30 Rock. Maya’s latest CD, CRY LOVE has been listed on several “Best of” 2011 lists including #1 on Pop Matters, and Amazon’s “Top Albums You May Have Missed”. Maya is wearing a stunning dress by Synderela.

The designers had some beautiful looks for their models and with Caravan, Salon Grafix, Babyliss Pro,POP and Zoya these looks came to life on the runway.

Primary’s focus is on individual style and inspired by simplicity, movement, contrast, functionality and ultimately promoting the essential. Primary is most inspired by what women wear on a daily basis, the essential pieces of a modern woman’s wardrobe. For Primary the look for hair was left loose and down with a little bit of a messy wave. To get this hair at home we first prepped the hair with Healthy Hair Nutrition Rerstyler and then gave the hair a liberal spray of Shaping Hair Spray. Once the hair was prepped Babyliss Pro Deep Wave Iron was used on all the hair after the hair had set we gave a light spray of water to loosen the wave and give it a little more of a lived in look. Makeup was a deep dark red matte lip and very neutral eye with POP Makeup. Nails were created by Zoya with a vampy oxblood shade called Rehka and then one finger had a triangle shape cutout.

HUMINSKA dress collections are inspired by Hollywood glam and waking dreams. Gorgeous creations that glide with style and ease over any woman’s natural lines, from budding beauty to mature sophisticate. The hair and makeup had a classic look slightly inspired by the 1950’s and some Lauren Bacall. The hair was prepped with Healthy Hair Nutrition Restyler and Shaping Hair Spray after it was curled with Babyliss Pro 1inch curling iron. Each curl was pinned and left to set as long as possible before taking a soft bristled brush to brush out the curls giving the hair shine and body. Keeping the hair to the shoulders and a deep part to one side Freezing Hair Spray was used to really hold that look in place. For makeup POP was all that we needed to give these models that head to toe look. Zoya nails were painted in a beautiful shade of deep red called Rehka with a french tip and glitter line for the nails.

Synderela believes that clothes are the silent words that tell the story of who you are an ambitious spirit, a courageous heart and rebellious style. For the hair style was a little like Veronica Lake inspired with a deep part to one side, a beautiful sleek wave cascading down one side and the other side slicked behind the ear. This look we prepped the hair with Healthy Hair Nutrition Restyler and Shaping Hair Spray after we used a curling iron pinning each curl and left to set as long as possible. This was brushed out with a large soft bristled brush and giving the final touches of High Gloss Hair Spray giving the hair shine and hold. Makeup was all POP with a dark grey smoky eye and a neutral lip. Zoya Nail Polish was painted in a light shade of pink called Mia.

Norma Ishak has been collecting rare and luxurious yarn from around the world is a passion that was acquired from her mother. Together, the mother and daughter duo transform the yarn into unique pieces of wearable art. For Norma Ishak hair look we went with an up-do. The models hair was styled by spraying the hair with Salon Grafix Shaping Hair Spray all over and then backcombing the hair in two sections the top section of hair and the bottom section. The bottom section of hair was then twisted into a french twist with the tufted hair being pinned into a roll shape above the twist. The top section of hair was pinned into a voluminous roll. Makeup was a dramatically extended black cat eye and a nude lip was created by POP Makeup. Nails were the new and amazing polish called PixieDust by Zoya in the shade of Godiva.