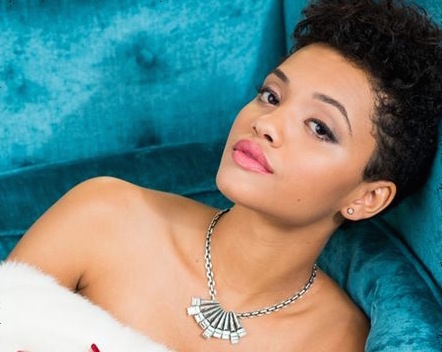 Caravan had a blast working with the rising star Kiersey Clemons for this super fun photo shoot. We photographed Kiersey in the Broadway Diva Suite at the Carlton Hotel and in Bar Bordeaux at the hotel.

An undeniable talent on the rise, Kiersey has quickly become known for the diverse and captivating characters she has brought to life on screen.  Kiersey has a handful of high profile projects under her belt for 2014.  First, she can be seen recurring on the critically acclaimed, Amazon series, “Transparent.”  Called the “best new show of fall 2014”.

Kiersey can next be seen on MTV’s brand new series, “Eye Candy” as “Sophia” [series regular, to debut January 12, 2015]. Check out some more details on the show HERE

Aside from her work in film and television, Kiersey is a talented musician and works on her craft daily.  She recently collaborated with Grammy Award winning producer and artist Pharrell Williams on multiple tracks, and her vocals can be heard on a handful of projects including DOPE, and “Transparent.”

Caravan just loves being at the Carlton Hotel and for this photo shoot we were able to utilize different areas of the beautiful hotel like the Broadway Diva Suite where we captured some amazing images.

For Kiersey’s hair and makeup looks it doesn’t take much to make this young beauty look stellar. For her first look we all Kryolan Professional Makeup and went with an understated pink eye with the eyeshadow palette in Tokyo and lined her upper lid with HD Cream Liner in Aubergine. We wanted to add that fun touch of color to her lips with Lip Stain in POP. For the final touches bit of color added to her cheeks from the Glamour Glow Palette in Posh her look was perfect.

Of course, no makeup look is complete without the proper skin prepping and we used Simple Skincare Radiance Cleansing Wipes and Ultra Light Gel Moisturizer for the perfect canvas.

It didn’t take much to style Kiersey’s hair and with a little bit of product from Sexy Hair we used some Play Dirty that is a great dry wax for short hair that gives movable structure and Soy Renewal for some extra shine her hair was ready to go.

On Kiersey’s second look we muted the eye color and went with something natural and bronzed. We used the eyeshadow palette Casablanca and HD Liner in Coco. On her lips we had a light application of Lip N Cheek Stain in Rose layered with a dab of the Lip Shine Wheel

With look three we added a little bit of extra depth to the eye makeup with the Nude Palette and smudged some Ebony pencil liner along the upper lid. For Kiersey’s lips we blotted down any gloss and added a little Lip Rouge in a natural matte color.

With Kiersey’s hair on this look we wanted to change it up just a bit and decided to use the Sexy Hair Flat Iron throughout the top portion of her hair and added a little Spray Clay. This gave her hair a more sleek look that paired with the black lace outfit she was styled in.