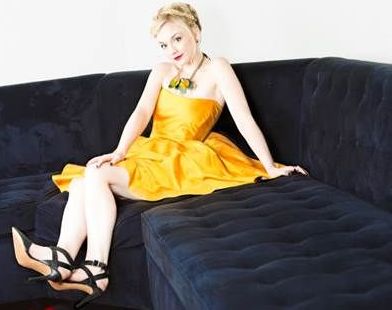 Emily Kinney came to Caravan for a fun photo shoot and we picked some great designer pieces from Nanette Lepore, Marni, Dana Maxx and more. I had a blast styling her hair and makeup for this shoot.

Rising star Emily Kinney currently plays Beth Greene on the hit AMC television series, The Walking Dead.  Her character has continued to evolve since the first season after the despair surrounding her mother’s death and horrific reanimation that nearly drove her to suicide. She also used these vivid acting skills in her recurring role as Emily on the second season of Showtime’s The Big C.  Kinney has also made various guest appearances on myriad television series such as CBS’ The Good Wife, NBC’s Law & Order: SVU, USA’s Law & Order: Criminal Intent, ABC’s The Unusuals, and MTV’s The Game Killers.  She also appeared in the Universal Pictures feature film, It’s Complicated, which was directed Nancy Meyers.  Next, Kinney will appear in Director Stacie Passon’s independent feature film, Concussion.

In addition to television and film roles, Emily Kinney has also had an impressive theater career.  Upon her arrival in New York, Kinney immediately made her Off-Broadway debut in Iphigenia 2.0 at the Signature Theater, directed by Tina Landau.  She went on to play Wendy Darling in Alabama Shakespeare Festival’s annual production of Peter Pan.  On Broadway, Emily was seen as Anna in the Tony Award Winning production of Spring Awakening.  She starred opposite Estelle Parsons as Jean Fordham in the First National Tour of August: Osage County.

Aside from acting, Emily is a singer and songwriter.  Emily recently released a five song EP entitled Blue Toothbrush, which can be found on iTunes and CdBaby.  She plays her original music in different venues around New York City, including Rockwood Music Hall and Pianos.  Emily enjoys writing about her acting and New York City adventures on the blog, Backstage Magazine.  Emily Kinney is a New York City-based actress originally from Nebraska.  She is an incredibly versatile actress, appearing in notable television series and feature films as well as theater productions.

For this casual look we went with a loose fishtail braid leaving a little bit of hair loose around the face. The makeup was natural on the eyes with a fresh pink lip. Nails were painted a dark grey and to give the nails an extra bit of fun factor a thin line of red was painted down the side of the nail.

Emily is wearing a cute romper by Dana Maxx & platform shoes from jcp.com

For this amazing sleek look we went with Emily’s hair down and styled with large loose waves. We got this by first giving the hair a spray of Shaping Hair Spray and then went over all the hair with the ConiCurl. Once the hair set and cooled a quick and easy shake of the hair and it was fantastic. For her makeup the only change we did was pump up the lip color a bit by using a lovely deep red.

It was fun to do something a little different with Emily’s hair for these looks. We gathered the back section of hair into a ponytail and then by taking smaller sections of the hair and twisting and pinning it into a free formed bun.  The front section of hair was put into three different braids that we then twisted around the top crown of her head and pinned them down. All this look needed when it was done was a little High Gloss Hair Spray and she was ready to go.

and the great black shoes available at HSN

This beautiful spring colored long dress is by Shoshanna

With Emily’s hair for this final look we went with a beautiful structured high bun. This is easy and quick by putting the hair in a high ponytail and working your way around by using sections and rolling them into a smooth curl and pinning that down. Another spray of Shaping Hair Spray and the look was prefect.

This beautiful red long flowing dress is by RED DOLL, the sexy black heel with ankle straps is available at HSN